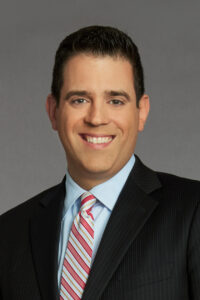 A native of Haverhill, Massachusetts, who still lives in his hometown, he is a graduate of Cornell University and Phillips Academy Andover, and holds a Bachelor of Science degree in Meteorology.

A member of both the American Meteorological Society and the National Weather Association, Matt enjoys igniting passion and curiosity, for weather and the world around us, in others.

In addition to his forecasting experience, he has been an instructor of meteorology at the college level, and over his career has shared his weather knowledge and enthusiasm with over 120,000 students of all ages.

During his tenure at NECN, Matt’s dedication to our region’s schools brought a commendation from the Massachusetts State Senate, and he has delivered those same efforts on-air, through his weathercasts, reports and interactive viewer segments. He has always believed in offering the viewer more from first delivering regular, hour-by-hour rain/snow maps in the Boston market to pioneering our exclusive 10-day forecast.

Matt’s community work has earned him several awards for dedication to local municipalities and organizations, as well as the Massachusetts State Police Public Service Award for assisting in preparation for a major hurricane strike to New England.

He also provided his services to the state police for street level weather forecasting and analysis during the Democratic National Convention in 2004, and his efforts to raise awareness for military veterans and families earned him the Patriot Award from the Ahern Charitable Foundation.

Matt has conducted private forecasting for aviators, which led to national victories in races requiring no use of instrumentation during flight.

Before joining the NBC 10 Boston and NECN family, he was a meteorologist at NewsChannel 34 in Binghamton, New York and NewsChannel 9 in Syracuse.