The Brian A. Brooks Distinguished Service to Veterans Award 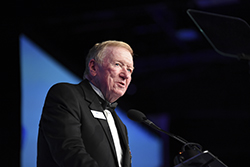 After Beirne Lovely passed away, 10 of his 12 grandchildren (those old enough to talk) each answered a simple question: ‘What do you love most about Papa?’ Their responses were personal, yet strikingly similar, ranging from ‘I love that he’s brave’ and ‘I love that he fought for our country’ to ‘He is always in a good mood,’ ‘He is caring no matter who the person is’ and ‘He’s supportive and loving and kind.’ These sentiments paint a poetic picture of a man who lived in service to his country, God, his community and, above all, his family. In these reflections, one common theme emerged, summed up whimsically by his granddaughter, Taylor: ‘I love that Papa is the best.’ All who knew him will certainly agree that Beirne Lovely was, indeed, the best.

Contrary to what his red hair, fair skin, and loathing of the beach might’ve indicated, Beirne was raised in the seaside town of Nahant, Massachusetts. After graduating from Lynn Classical High School, Beirne matriculated to Dartmouth College where, despite a questionable performance in his freshman chemistry class (a story he loved to regale), he made his mark, forming a close bond with his brothers of Chi Phi fraternity and scrumming on the rugby field. As the conflict in Vietnam brewed, Beirne heeded his instinctual desire to serve his country. While he began his military career in the Army ROTC at Dartmouth, he chose to accept his commission as an Officer in the Marine Corps on June 10, 1967, alongside many of his fraternity brothers. After earning the designation of Infantry Officer at Quantico, Beirne deployed to Vietnam in January of 1968, courageously leading his men in the 1st Battalion 9th Marines (notoriously coined ‘The Walking Dead’) into battle in Khe Sanh during the Tet Offensive. For his heroism, Beirne was awarded two Bronze Stars as well as a Purple Heart and, later, a Navy Commendation Medal and a Navy Achievement Medal. In an effort to preserve the histories of combat veterans, Beirne gave his voice to a number of publications. His oral accounts for the web series, Witness to War, reveal stories of bravery, humor, and heartbreak that will endure the test of time. Beirne was profoundly committed to veterans, principally through the New England Center and Home for Veterans, where he tirelessly volunteered his time and expertise, most recently as Chair of the Board.

Following Vietnam, Beirne became Executive Officer of the Marine Corps Barracks in Newport, RI, where one of his jobs was to make casualty calls to parents whose sons had been killed in action. Beirne always recalled this as one of the most difficult duties of his military career. While in Newport, he also began his lifelong commitment to his community through volunteering, coaching, and working with the city’s youth, eventually earning the recognition of Outstanding Young Man of Rhode Island by the US Junior Chamber of Commerce. It was also during this time that he first met his perfect match, Joan. Ever the charmer, Beirne coaxed Joan into a date and, after a whirlwind courtship, they married after just 8 months together, in order to ensure a military wedding. Even a blizzard on the day of their ceremony did not prevent Beirne and Joan from having an arch of swords (albeit, indoors).

Upon completing his service and being honorably discharged from the Marine Corps, Beirne enrolled in law school at Boston University, graduating cum laude, and eventually being recruited to Goodwin Procter. As a Senior Partner, he acted as sage mentor to new lawyers and founded the Children’s Fund at Goodwin, collecting toys, clothing, and money for children and the homeless. In 2007, after over 30 years, Beirne ‘retired’ and began his next career as the first in-house General Counsel for the Archdiocese of Boston. As a lifelong Catholic with a deep-seated faith, working for Cardinal O’Malley was the privilege of a lifetime. Beirne’s steady presence, sharp wit, and intellectual prowess were mainstays at the Pastoral Center for over 12 years.

For all of Beirne’s impressive professional accomplishments, he also made a conscious decision that his career was his livelihood, but not his life. Beirne always made time for his community and was actively involved in the Town of Milton for over 25 years. He served in many capacities, including as a member of the Warrant Committee, a Town Meeting member, President of the Milton High School Boosters, and Chair of the School Committee.

Even in the midst of his many hours of volunteering, working, and being a family man, anyone who knew Beirne knew that there was always time for golf. He loved spending time on the course—any course—with colleagues, friends, and most especially, his sons. However, even golf was never purely recreational for Beirne. He steadfastly organized memorial and charity golf tournaments – including spearheading NECHV’s annual tournament, now named in his memory. He was also actively involved in the leadership at Wollaston Golf Club in Milton, where he held multiple positions. In acknowledgement of his dedication, Wollaston recently recognized Beirne with the Distinguished Service Award, an honor that meant the world to him.

Beirne was many things to many people, but nothing was more meaningful to him than family. When given an option between family and anything else (yes, including golf), Beirne never wavered, as he lived by the mantra, ‘Family First’. He enthusiastically coached his kids and grandkids; cheered–not so quietly–at hockey, soccer, lacrosse, basketball, baseball, and field hockey games; picked up and dropped off his grandkids at school; always accepted a phone call from his family, no matter how busy he was (sometimes to the chagrin of his clients). Beirne lives on through his beloved wife and rock, Joan, and their four children and their families: Kristen, Dennis, Camden, and Maggie Carr; Michelle, Shannon, Zoe, Hailey, and Orin Staiger; David, Kerri, Dylan, Jackson, and Taylor Lovely; and Gregory, Sarah, Scott, Wesley, Eliza, and Mae Lovely.

Eternally selfless, a conversation with Beirne was never complete without his trademark, ‘What can I do for you?’ He was the physical manifestation of what it means to show up and he had a rare ability to be there at just the right time to listen or offer advice. Mostly, he demonstrated how to speak and act with dignity, kindness, and humility. In essence, he led by example. This, along with his contagious sense of humor, is the beautiful legacy that Beirne has bestowed upon generations to come.